Friday Thoughts: So This Happened…..

Last Friday, we said our final good-byes to a co-worker, a colleague, and a friend. It was a cold, bitter, ugly day that I won’t relive again, but to say the amount of laughter, happy tears, and conversation afterwards as we reconnected, talked of the great things Janet did, and just wrapped ourselves up the caring souls of this community would have warmed even the most cynical of hearts. Janet was certainly smiling down as the multipurpose room was aglow again for that afternoon.

But, as with everything, real life pushes us past our grief and moves us forward, whether we want to or not. So, real life took me the Iowa/Ohio State game.

(Google Photo spliced together a couple of pictures to make this! Pretty awesome!) 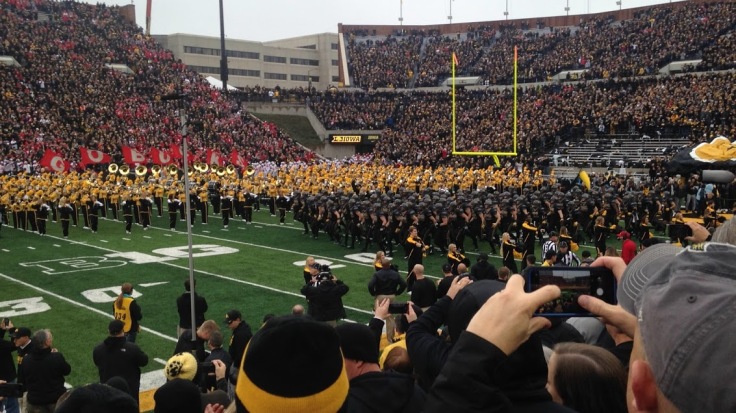 This is my favorite picture to take on game day! 🙂

We had great seats as you can tell. However, I didn’t have high hopes for this game. Two scenarios popped in my head:

The butt kicking that happened to Ohio State was unexpected and delightful fun! The fans throughout the game were as pumped up as I’ve ever seen them, and the aftermath was an expression of utter joy as Iowa fans (including my daughter and I) rushed the field. 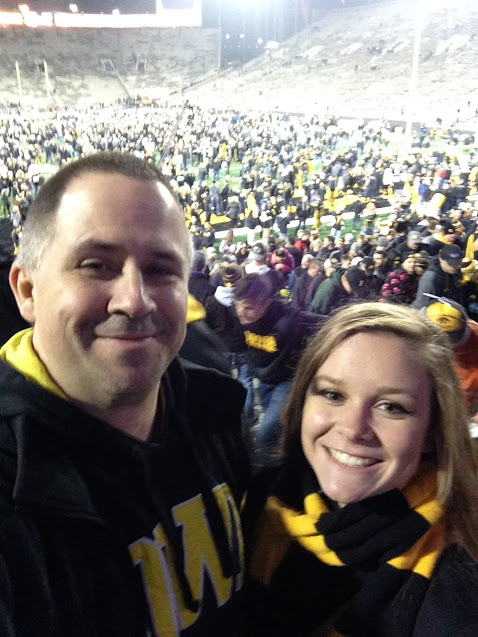 So, this gives us a great entry into the work week, which the kids worked hard, I worked hard, and we found ourselves on Thursday.

With last year’s basketball team up at the high school, I’ve got another team of 8th graders to put through the paces. While we don’t have the shooters that we did with last year’s group, I have girls who are 5’9″, 5’10”, and 5’10”. We’ve got better height than most high school teams do, which is a first for me! Our first game is against a perennial power in this part of the state, and we matched them basket for basket, losing by one point. It’s a game we could have won, period. It was fun to watch this team start out nervous and end the game believing they could win, they could beat a team that beat them last year by 15. This team won’t run teams off the floor, but they will be fun to watch!

Which brings us to Friday and this happened: Basketball Letter

Typically, our 8th grade team is in the hallway as the students arrive to greet them, share in their sleepy eyes, and just to them off to a good start. One of my players walks up to me and hands me the above letter, telling me, “I just had to write this.”

As I wrote her later, it just made my day! I’m pretty low key on Fridays to start, and while I was that teacher, for a few hours the stars aligned in the magnificent positive way. What a way to start the day, the season, and to recenter myself after being knocked back with the gut punch the previous week.

So, keep going forward, you’ll never know where your positive inspiration will come from! 🙂

One thought on “Friday Thoughts: So This Happened…..”

cvarsalona
The Space Between the Pages

my feeble attempt at capturing this "one wild and precious life"

It's not always pretty...but it certainly is Joyous

This is where I write.

Practicing What I Teach

shouting my heart out for all who may listen

The Daily Meow
Ms. Chen in the Middle

my slice of life writing

Laughing With Lisa
keepin' it small